What makes a good photo: 8 things to keep in mind

Beauty is in the eye of the beholder, but there are simple rules to follow that can make your photographs stand out above the rest. Here we will take a look at what makes a good photo. Learning how to separate the average photographs from the good photographs takes some practice and patience. Keep the following in mind before you shoot.

Your subject matter is what makes a good photo

Be sure of what you want to capture in your shot. Is your subject interesting? Will it immediately catch your viewers eye? This is also important to know for the purpose of composition. Your subject is by far the biggest contributor to whether you have taken a good photo or bust.

The rule of thirds is what makes a good photo

The rule of thirds is a type of composition in which an image is divided evenly into thirds, both horizontally and vertically. The subject of the image is placed at the intersection of those dividing lines, or along one of the lines itself. Most cameras will show you these grid lines in the view finder. Some images break this rule and are still spectacular. It is a creative decision and this is just a good rule of thumb. Stick to it mostly if you are a beginner.

Lighting is what makes a good photo

It is important to take note of light and how the light is going to act in the photograph. Where will the light bounce off of? What shadows are going to be cast in the picture?
Learn more about how to make the most of every light opportunity in this blog.

Composition is what makes a good photo

Composition can be defined as positioning the objects in the frame in such a way that the eye catches most significant area of the photograph. So for example, if you are shooting a waterfall, you could use its stream to lead the eye to the feature.

Colour balance is what makes a good photo

Colour balance refers to the global adjustment of the intensities of the colors (typically red, green, and blue primary colors). The point of this is to render specific colors – particularly neutral colors – correctly. In underwater photography white balance is particularly important.

Angle is what makes a good photo

Camera angles can be used decisively with each of the following shots to help push the idea, concept or emotion that you want to convey at that moment.
Shots from above and can make people or objects seem insignificant or part of something far greater, it gives the viewer a sense of omnipotence. Similarly the high angle shot is used to make the subject seem insignificant and maybe engulfed in the wider picture. Coming down from there to an eye level shot allows a relatively neutral and relatable perspective. Low angle shots provide disorientation, since there is only the subject and sky or ceiling. It also creates fear and insecurity in the audience, it could invite a sense that the subject is regal or superior.

Caption is what makes a good photo

Captions are a great way to draw the viewers into the photograph. Whether that is to add value, information about the scenario, the inspiration or thought behind the picture it can dramatically increase a pictures perceived worth. When people purchase art they are often buying because of the name of the artist. A story about the picture will help bring the audience closer to the scene.

Emotion is what makes a good photo

Show stopping photos make people feel. If your photo clearly grips onto an emotion such as sadness or delight you are well on your way to getting a good photo. A sure fire way to inspire an emotion in a photograph is to use visual storytelling, put clues throughout your picture when composing or editing your picture to hint at what the picture is trying to communicate. Think of a rose sitting on the windowsill, with a grumpy grey storm building behind it through the glass, it tells a moody, passionate story even though there were no people in the example to say this.

A natural frame is created when you place a secondary object, such as a tree or a door, in the scene of a photograph so that it frames your main subject. Natural framing helps add drama to an image. When using natural framing be sure to use it in a way which highlights your subject rather than distracting from it.

What are your top tips to achieving a great photo?

Robyn joined the Africa Media in 2018 to bring a young and enthusiastic approach to our social media and marketing campaigns.

Why the world needs conservation photographers 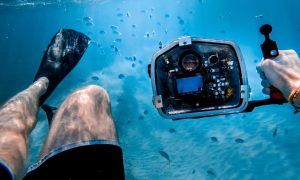