Rescuing elands in the African bush

Yesterday, I helped save a baby eland from a gruesome end as a lion’s snack on my tour of Garden Route Game Lodge in South Africa.  Evidently, babies are the crème de la crème in a lions diet and it doesn’t even matter what kind.  From eland to buffalo to human, lions have a keen sense for weak animals and seek them out for prey.  So, I have absolutely no idea why the reserve’s three lions, one of which is believed to be the largest lion ever measured, had not already fed on the floundering eland.

My day started out as any other might for someone residing in a place where big game reserves are standard. I hopped in the Range Rover expecting to see some grazing giraffe, enormous elephants, and striking zebras.

What I was not expecting to see was Patrick, the resident expert on big predators, capture the scraggly eland less than 100 meters away from a full grown female lion.

Naturally, this raises a lot of questions, like how did this even happen? Well, as Liezel drove us through the park’s lion reserve, which has electrical fencing around the perimeter, we spotted a lion; and because I happen to be with three wildlife photographers, the driver made sure we got as close as possible at just 10 meters away.  That’s when Liezel’s ranger friend drove up to us and began frantically muttering in Afrikaans before driving down the hill about 80 meters. Before I realized what was happening, Patrick was out of the game vehicle creeping slowly around a small moving animal that was definitely not a lion.  Meanwhile, the photographers were busy snapping pictures of the big cat we were watching before the second ranger approached.

All of the sudden Liezel abruptly shoved the car into gear and we moved down and parked next to Patrick, who had just tried and failed to grab a baby eland’s hind leg.  Liezel got out of the car with a piece of cloth that she had fashioned into a make-shift half meter long rope.  They double-teamed the distressed eland while it took sips from a muddy pool of water. When Patrick finally grabbed it around its midsection, the eland let out a few cries for help.

I knew the screams were a bad sign because Patrick kept yelling at us in the car, “watch for charging lions, turn around and watch for the lions in all directions!” I guess the animal’s call tipped off the lions, putting both the eland and us in an even more dangerous position.  Liezel could not get its legs tied together, partly because the rope was not really a rope and partly because the eland was fighting back, hard. Patrick, getting frustrated with the situation, shouted at Liezel to hurry up because the situation was “proper dodgy.”

Wanting to get the heck out of the lion reserve, Liezel and Patrick hustled to get the fighting animal on top of Jeff and me in the back seat of the Range Rover.  It was our job to hold it while we drove to safety.  The eland was muddy, wet, and surprisingly strong.  Jeff and I held it as we traversed across very bumpy and uneven ground to Liezel’s cabin in the middle of Garden Route’s reserve, where we let the little girl out.

Garden Route’s wildlife experts will now raise the baby eland in Liezel’s yard, where it has just less than an acre to graze and run free.  They’ve named her Bahati, which means luck in Swahili.

It was an exciting day in the field as a Travel and Environmental Journalist for Africa Media.

Land of sun and coconuts: Part 2 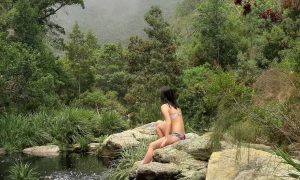 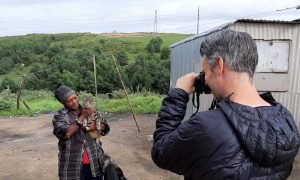 Land of sun and coconuts: Part 1