The wonder of African wildlife

Hayleigh Hume joined our Wildlife and Travel Photography internship in June of 2014. She received specialist training under the watchful eye of Clare James and Michelle Coetzee (our resident experts) and was able to develop her photography skills to a professional level.

Haleigh has nothing but praise for the wildlife photography program. She left having learned not only a new set of skills, but also with fantastic memories that will surely stick with her for a lifetime.

Here is what she has to say about her third week in Africa!

This week we took off for a four day trip to Plettenberg Bay. We started off with a visit to Jukani, a wildlife sanctuary which specializes in big cats which have been rescued from bad circumstances such as being house pets, live in small zoos and with circuses. They had a range of species of wild cats including Bengal Tigers, Siberian Tigers, Pumas and a Black Leopard, which to our amazement jumped up on the highest rock and posed for us with his gorgeous piercing eyes! They had large enclosures with plenty of open land and hidden forestry and greenland for them to hide in. We went just before closing time at dusk when the animals are most active in the wild and begin to wake up for hunting, which meant we saw them at their most active and just in time for feeding – which was a great photo opportunity for us!

The next day we headed off to the Tenikwa wildlife awareness centre – another specialist centre for big cats. We were able to get into the enclosure with the cheetahs while they were being distracted with meat. We were welcome in the enclosure, as long as we didn’t crouch down. The trick with big cats is to stay tall so you look less like prey – it was pretty nerve-wracking! I learnt that the name Cheetah originally came from Hindu, meaning ‘spotted one’, which is how they ended up with their iconic name.

The one sad thing about cheetah conservation is that they often end up being inbred due to the shortage of different bloodlines, which result into some being born with deformities such as a loss of spots. One of the female cheetahs, Thandie, had a small loss of spots on her two front shoulderblades. This – in the wild – would have made her an easy target due to the lack of camouflage.

One cheetah who tugged on my heart strings in particular was Chester, the diabetic cheetah, who has insulin shots daily. Apparently he would have not have stood a chance surviving in the wild with his condition which means that conservation has given him a second chance in life.

Master the art of underwater photography in a tropical paradise

The next day we planned to dive with seals. Firstly, our dive was rescheduled due to the spotting of a great white shark minutes before our dive – very exciting! Thankfully, there were no great whites during our dive! The seals where amazing to dive with, so inquisitive. It was great to get so up close and personal, some even grabbing onto my flippers, spinning around while blowing bubbles – just having a great time! We practised underwater photography with our field specialist Clare’s underwater camera. Underwater photography is amazing and sheds a hole new light to photography and the creatures that live beneath the waves. Overall, there was a colony of over 4,000 seals on the seal island we visited, a truly unforgettable experience!

Our next trip on the map was Birds Of Eden, a 12 hectare enclosed sanctuary for all kinds of birds. Some were rescued from being household pets and others bred within the sanctuary. Rosie, one parrot in particular, followed us around the whole trip and said phrases like “good morning” and “what’s the time” – very entertaining! They were all able to roam and fly about as they pleased. At lunch I spoke to one of the restaurant workers who told me that when she started working there she had a pet budgie which she couldn’t bare to see in a tiny cage no longer. She released her out into the open space at Birds of Eden and she occasionally sees her flying about. She even met a communion budgie and the two are now an inseparable pair – such a sweet story.

Situated next door to Birds of Eden was Monkeyland, which had 11 different species of monkeys under their care. Monkeyland is a monkey rehabilitation centre for primates who were mainly pets and have become destructive due to their wild nature and being forced into an unnatural habitat. Monkeys belong out in the wild and not in a small house treated like a cat or dog! Most monkeys, when first arriving to Monkeyland, are kept in an outdoor enclosure situated in the middle of the forest, so the other monkeys can get used to the new smells and sounds of their new home, as well as giving the other monkeys time to adjust to them and eventually accept them as part of the family.

Our last trip in Plettenberg Bay before heading back to Mossel Bay was to Knysna Elephant Sanctuary, another rescue centre which mainly included elephants who where orphans or rescued from poaching. In sixty years, from 1850 to 1910, the volume of ivory needed to keep pace with the world’s demand was huge. Britain imported on average 500 tons of ivory each year, world consumption in the late ninetienth century reached about 1,000 tons. What this meant in elephant terms, according to contemporary estimates, was that 65,000 elephants where killed annually to satisfy the need for ivory.

The most touching thing about my experience in South Africa, is the sheer passion and determination each sanctuary and centre has towards conservation, rehabilitation and keeping the bloodlines of endangered species running. Without the help of these conservation efforts, these animals would not have stood a chance in the wild and species that we have grown to know and love would cease to exist.

Explore Africa whilst learning about travel and wildlife photography

Explore Africa whilst training as a travel and environmental journalist

Make your own documentary whilst exploring underwater Africa 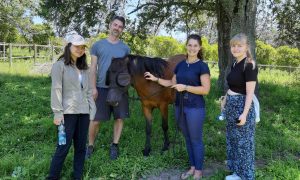 Underwater Photography: Playing it by ear