Snorkeling with whale sharks ranks near the top of any diving bucket list. With a head like the hood of a Ford, dizzying dots and tiny eyes incongruous with its sheer mass, this gentle animal is the largest fish in the oceans. The irony for divers, of course, is that you’re most likely to find whale sharks near the water’s surface with a snorkel clenched between your molars instead of a regulator. But it doesn’t make the experience any less sensational. If you’re looking to scratch whale sharks off your own bucket list, each of the following destinations rank among the best spots to come face-to-face with these docile beauties. 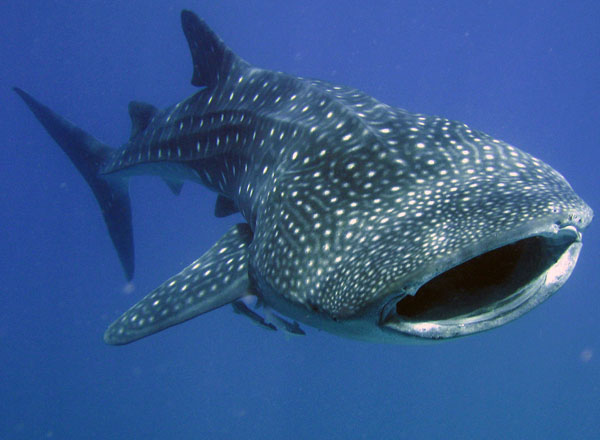 1. Holbox, Mexico
Local fishermen in Holbox, an island off the Yucatán Peninsula, paid no attention to the whale sharks that frequented their waters every summer, since they didn’t consider the animals a food source. But when tourists who’d been swimming with the creatures in Africa started spreading the word that whale sharks were to be found in Holbox, the whale sharks became one of the town’s prime attractions.
When to Go: Mid-July through the end of August for the best encounters.
Operators: Holbox Whale Shark Tours (holboxwhalesharktours.com). Stay at Tropical Casa Blanca (tropicalcasablanca.com) in Playa del Carmen. Holbox is a couple of hours away by car, but you can’t beat the boutique resort’s location near hopping 5th Avenue.
Price Tag: Holbox Whale Shark Tours arranges tours from Holbox for $110 per person. Tropical Casa Blanca has also teamed up with the Abyss Dive Center to offer a Stay and Play package: seven nights’ accommodations at Casa Blanca and five, two-tank ocean dives for $825 per person.

2. Gladden Spit, Belize
The spawning of cubera snappers draws the whale sharks to Gladden Spit, near Placencia, Belize (about 100 miles south of Belize City), and three days either side of the full moon gives you the best chance at seeing the mammoth fish. Boats have a 90-minute window in which to catch the whale sharks, while divers and snorkelers are required to maintain a 10-foot distance. Flash photography isn’t permitted to protect the animals, but don’t worry, diving with the mammoth creatures is a mind-blowing encounter worth every bit of stringent-rule-following.
When to Go: Plan your visit between April and May, when the snapper spawning lures the whale sharks to Gladden Spit.
Operators: The Isla Marisol resort (islamarisolresort.com) is situated on a private island and has individual, air-conditioned cabanas and a family-style reef house, all with views of the water.
Price Tag: Isla Marisol has seven-night dive packages during whale shark season starting from $1595 per person, which includes airport transfers, lodging, and meals.

3. Honda Bay, Palawan, Philippines
Everyone already knows about Donsol to the north, but for a different kind of whale shark encounter head to Palawan’s Puerto Princesa. Dive boats scout for whale sharks between dives or on custom trips to see the animals and then hustle you into the water with a snorkel and mask to take in the spectacle. You can go through a dive shop to “schedule” an encounter, and local guides — often fishermen — also take visitors to sea in traditional outrigger bangkas to spot whale sharks.
When to Go: The calmest sea conditions occur April through November.
Operators: Toto Cayabo, one of the first local guides to start taking people out with the whale sharks, comes highly recommended Near the Puerto Princesa Airport, Moana Hotel Palawan (moanahotelpalawan.com) has basic rooms with air conditioning and hot showers, along with an on-site restaurant and dive shop.
Price Tag: About $70 per person for two dives, including all gear and a dive guide. Room rates start from $19.

4. Cabo San Sebastian, Mozambique
Home to one of the greatest concentrations of whale sharks in Africa and pristine coral reefs unpressured by mass tourism, Mozambique is one those swoon-worthy, off-the-beaten-path destinations that wins you serious bragging rights among your buddies. Most encounters with the whale sharks here happen when the animals are feeding on plankton and krill near the surface. Cabo San Sebastian’s reefs (66 to 131 feet deep) are where they’re often seen, with most animals around 30 feet long.
When to Go: November through February offers the best conditions.
Operators: Marlin Lodge (marlinlodge.co.za) is a five-star dive facility and resort in the Bazaruto Archipelago. It features 17 luxury beach suites sitting just a few steps from Flamingo Bay.
Price Tag: Two-tank dives are $185 per person. Suite rates start at $580 per night per person, and the price includes meals and drinks.

5. Utila, Honduras
Impromptu snorkel sessions between dives are when nearly all whale shark encounters occur in Utila — one of the few places in the world where the animals can be spotted year-round. The deeper waters off the north side of the island are where the animals are most often seen, and guides look for the cues of water boiling with jumping tuna and flocking seabirds.
When to Go: Year-round.
Operators: Deep Blue Resort Utila (deepblueutila.com) has 10 rooms overlooking a private beach. Rooms at the Mango Inn (mango-inn.com) are set on lush tropical grounds full of lime, coconut and mango trees.
Price Tag: The Deep Blue Resort dive package ($850) gets you seven nights, three dives per day, two night dives and meals. Packages including seven nights at the Mango Inn, breakfast, dinner, airport transfers, two dives per day, a night dive and all gear start at $599 per person.

What is your passion? Click on the best answer below!